On Friday, August 23rd, the 2019 Trucking's Top Rookie winner was announced at the Great American Trucking Show in Dallas, TX. All ten finalist were present for the announcement. The 2019 winner is Dwight Arnold of Stevens Transport. In this video, Dwight reflects on his nomination for this award; discusses being named one of ten finalists and talks about the positive experience of starting his trucking career with Stevens Transport. Congratulations, Dwight! Your family at Stevens Transport is incredibly proud of your accomplishments.

Dwight Arnold was on his way to pick up his next load from the shipper in Eldridge, IA when he received a phone call that would positively change his day.

“Dwight! I’m excited to let you know that you have been selected as a finalist for the Mike O’Connell Trucking’s Top Rookie Award contest presented by Truckers News!” a Stevens representative exclaimed to the receiver.

Dwight instantly could not contain his excitement. “I was and still am completely shocked,” he said. “I did not expect this at all, but I’m ecstatic about this result and I can’t wait to represent Stevens among all of the other finalists!”

Dwight’s Service to His Country

The military taught me much about dedication, hard work, and perseverance.
Dwight Arnold 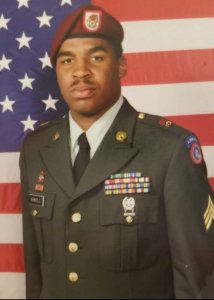 “The military taught me much about dedication, hard work, and perseverance,” Dwight said. “Because of the nature of my job, I always had to be on my toes to make sure that all of the ammunition was delivered on time. If I failed at my job, essentially a domino effect would occur with everyone else’s job, so I had many people depending on me.”

Over the next 10 years, Dwight served in 3 different deployments to Afghanistan and Iraq and received many awards, including:

In between deployments, Dwight served as a Military Recruiter in Brunswick, GA. As a military recruiter, Dwight planned events with local high schools and colleges, gave public speeches, and organized meetings with community leaders to help recruit new talent into the army. Because of his exceptional recruiting efforts, Dwight was awarded the Gold Recruiter Badge with two-star sapphires.

Dwight’s last assignment in the Army was a Special Unit Transportation Officer at Fort Campbell in Hopkinsville, Kentucky. In this role, Dwight transported sensitive materials within Tennessee and Kentucky and trained workers in standards for hazardous material handling. Because of his considerable training ability and communication skills, Dwight was chosen to join the advanced travel training team for elite supervisors. 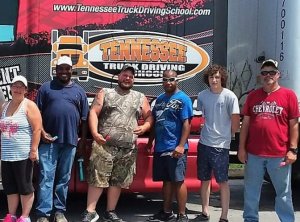 In August of 2014, Dwight was Honorably Discharged and retired from the United States Army. Although Dwight had pursued other career paths after his retirement, none of them quite fit what he was looking for. Dwight wanted a profession that matched what he was already used to and allowed him to see his family more. Having experience in the transportation industry, he realized that a profession as a truck driver would be the perfect fit.

Dwight attended truck driving school at Tennessee Truck Driving School and graduated with his CDL in June of 2018. While researching companies that he could continue his trucking career, Dwight found Stevens Transport.

I saw that Stevens offered top-quality training and had a very strong recruiting background, and both of those factors were highly impressive to me.
Dwight Arnold
Trucking’s Top Rookie Finalist

“I saw that Stevens offered top-quality training and had a very strong recruiting background, and both of those factors were highly impressive to me,” Dwight said. “I also watch many YouTube videos from Stevens drivers who had positive experiences, so I knew that it was the company for me.” 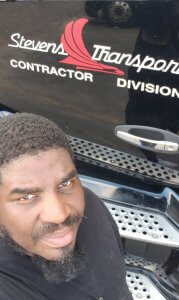 Dwight attended orientation later that month and received the keys to his solo truck in August of 2018. Dwight quickly made the decision to open an independent trucking business under the Stevens Contractor Division one month after receiving his keys, and is currently a member of the Kraft dedicated fleet.

“Trucking has given me the opportunity to make a better home dynamic for me and my family,” Dwight said. “As for my future plans with Stevens, I’m hoping to start a fleet with 4-5 trucks. I also hope to build financial stability with my family, thanks to the financial success that I have had with trucking so far.”

“Dwight is a driver that I know will complete every task presented to him with a positive attitude,” DeAnthony said. “He consistently delivers every load on time and is a very motivated and exemplary driver. I am glad to have him on my team!”

“Dwight has a commendable safety record,” Safety Director Larry Gandy said. “He is a driver who is attentive to detail and diligent in his duties, and who is able to quickly adapt to changing situations and circumstances that he faces while on the road. I can’t wait to see what else Dwight will accomplish at Stevens!”

The winner of this award will be announced at the Great American Trucking Show, occurring on August 22-24 at the Kay Bailey Hutchinson Convention Center in Dallas, TX. Watch for updates on the outcome of the winner on our social media accounts, including Twitter, Instagram, and Facebook!