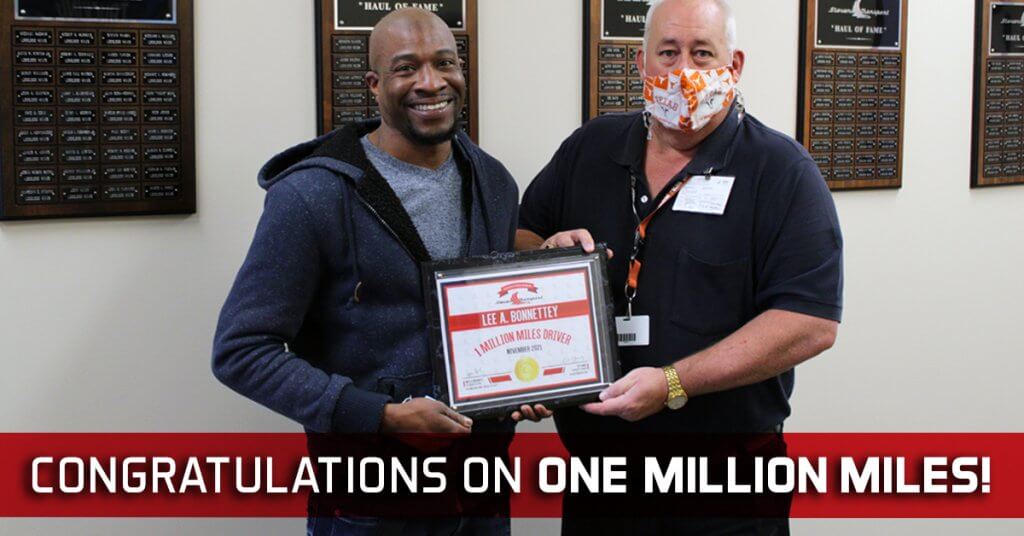 Lee’s journey to joining the million-mile club started in late 2012. Lee, a native of small-town Rolling Fork, Mississippi, moved to Kaufman, Texas, and attended custodian school in the early 2010s. Lee quickly decided that he was looking for a career, not the job he was currently working, and while at a local library, Lee found an ad in a newspaper for the Stevens Driving Academy. Lee was hesitant to pursue a career in driving due to having no experience, but after passing a driving school trailer that same day, Lee decided that it was fate telling him to give Stevens Transport a shot.

Fast forward to 2013, Lee Bonnettey graduated from the Stevens Driving Academy with his Class A CDL. After months of training and developing his skills as a driver, Lee finally felt confident behind the wheel. “The fear of operating the truck and being behind the wheel nearly kept me from becoming a driver,” said Lee. “I became terrified of the idea of driving a big truck, but the Stevens Driving Academy helped me conquer that fear and taught me all the skills that I needed to be a great driver.”

Lee has found passion in his career as a professional driver, and since becoming one of the top drivers in the industry, Lee now enjoys passing on his knowledge to others. As a driver trainer, Lee can take all his skills and knowledge and instill them in his trainees. “Being able to take someone that is scared like I once was, and turn them into a great driver, is very fulfilling,” said Lee, “I look forward to being a driver trainer for a long time.”

Stevens Transport is very thankful to have Lee as a member of our driving force. We want to congratulate Lee on his accomplishment of joining the million-mile club, and we are looking forward to celebrating him reaching the two-million-mile mark!