Half A Century of Service 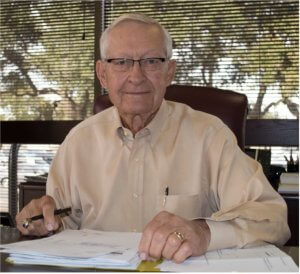 Fifty years ago today, Bob H. Nelson began his journey with Steve Aaron. On November 14th, 1972, Bob became the General Manager of Stevens Foods Inc. based in Paris, Texas. For those of you that do not know, Steve Aaron was in the meat processing business prior to expanding to the trucking industry.
Bob’s responsibilities as General Manager at Stevens Foods encompassed full oversight of the entire Meat packing production and processing plants to include operations and supply chain. Bob prided himself on discipline, details, and perfection. Bob’s attention to every line item on the procurement, production and operations side coupled with his tough negotiating skills and leadership made him the perfect partner to Steve.

Fast forward to 1979 when Steve Aaron began his next business venture in transportation founding Stevens Transport Inc. Bob being Steve’s right hand in Paris, was asked to move his family to Dallas to help build a world-class full-service Trucking and Logistics company. Thankfully, Bob accepted the challenge and has played an instrumental part of Stevens Transport’s 42-year history of continued growth and success. Bob says “the early days were extremely challenging as the barriers to entry were difficult to navigate. Having the understanding of moving the meat products to market though outside common carriers at Stevens Foods gave Bob and Steve a jump start when designing the blueprints for a truly exceptional North American Transportation and Logistics Company.”

Bob is incredibly accomplished and one of the most dependable, respectable, professionals I have ever had the opportunity to work with. I feel incredibly fortunate and blessed to have had Bob by my side for 50 years” His passion for success and can-do attitude is second to none.
Steve AaronFounder & ChairmanStevens Transport

Today, we thank and honor Bob’s incredible 50 years of dedication, commitment, and tireless efforts. As we embark on the 43rd anniversary of Stevens Transport, Steve Aaron and The Aaron Family would like to share their appreciation, love, and gratitude to Bob Nelson for being the BEST OF THE BEST IN CLASS business partner, friend, and family member.