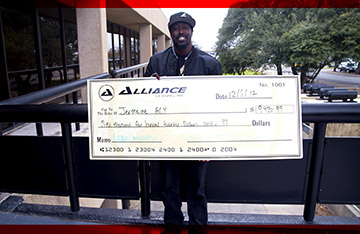 After attending Lone Star College in Houston to receive his training, Jermaine joined Stevens Transport and instantly felt like a part of the family. One of his fondest memories from the beginning of his driving career was the city-driving experience and learning how to maneuver the city streets. Fast forward to today and his safety understanding, training and support received from the home office keep him fueling ahead!

Jermaine decided to become a truck driver after trying “everything in the books.” After being in the oil field for years, he wanted to try something new that allowed him to see more of the outside world and driving a truck across the country sparked his curiosity. To those considering making the same career change and starting their exciting adventure in the trucking industry, Jermaine advises to have the drive to succeed and stay safe out there!

When asked what he attributes his success to, Jermaine states:

It’s the drive. I have the drive to do what I need to do and I enjoy it!
Stevens Driver Jermain Acy

When he isn’t working, Jermaine enjoys occupying his free time with many hobbies he pursues. However, he spends the majority of his time writing poems and putting the finishing touches on a book that he has been writing.

Congratulations, Jermaine! We are behind you every mile!